Grey is THE interior designer’s colour of choice, or so Jim the upholsterer tells me, so I decide to follow the expert’s advice,  choosing an attractive shade of grey wool from my upholstery fabric swatches. Colour chosen, the tricky part is about to begin…upholstering an antique armchair. I can’t wait to see the previously faded yellow vintage piece transformed into something much more chic, but there’s a long way to go.

Accurate measuring is the key to successful upholstery, and since maths is the one subject that did not choose me as a best friend, I realise quickly that upholstering this chair is going to be a real challenge.

So making a plan is the first important step. One row for down measurements, the other charting across. Measurements done I have to tot up my figures to work out how much fabric is needed. Simples! The pressure mounts (I blame it on self-diagnosed number dyslexia), and after multiple versions of measurements and adding up I concede defeat, ringing my teacher in a panic. Of course it only takes Jim the upholsterer a few seconds of looking at the chair to ascertain that I need five metres of fabric. Well, he has been in the trade for decades!

Then to cutting, starting with the inside seat, making sure the length is generous to include any (ahem!) upholstery mistakes! To save on fabric my teacher Sarah B shows me a neat trick of  adding a hidden length of calico for the parts which you don’t see. Note to self: ‘Must swot up on how to use a sewing a machine’ – on this occasion after several botched attempts, I enlist help in this department.

Next onto my not so favourite upholstery skill; cutting corners. Sarah B reminds me to mark on the inside on either side of the frame to determine the perimeters of my ‘Y cut’. It’s imperative to cut conservatively at first so you don’t over cut into the corners and leave any nasty gaps.

Cuts done, it’s all about neatly folding over and tacking to make the inside seat look presentable.

Onto tightening and securing that seat into place. Securing one side with tacks I focus on pulling and tacking the other. Just when you think you’ve pulled tightly enough, pull some more! This avoids later sagging.

Tacking in along the front of the seat, fabric trimmed.

Seat in place it’s onto the arms. So with all my measurements double checked by the expert, I cut out and stuff the grey fabric into place, not forgetting first to cover the arms with polywad to make sure the surface is nice and smooth. 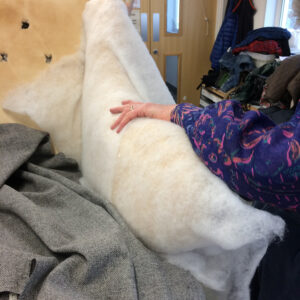 Fabric loosely covering the arms I can breath a sigh of relief that there is AMPLE grey wool fabric to cover, pull at and cut.

Before starting on the arms I cut off any excess fabric from the sides of the seat – a bit of upholstery housekeeping, then I pull through the fabric from the inside arm  which will need tacking onto the bottom frame to create a strong line of resistance to pull against.

Curvy arms like this are tricky as I soon discover, because to avoid your arms looking like wrinkly sausages, you have to pull REALLY hard. This involves mustering as much strength as you can through your fingers, then simultaneously pulling and tacking all along the length of the arm. In situations like this having a third hand would be a really useful thing…

It’s a slow process of careful cutting, pulling and tacking. Then trying to smooth the wrinkles by constantly readjusting the tacks and more pulling. My arms hurt, my fingers hurt and I feel like I’m engaging in finger athletics.

If all else fails I know I can always resort to putting a fold in somewhere central in the arm, but it’s such a wide expanse of arm that I decide the fold may look too prominent. So back to plan A, full force pulling. As I tug with all my might, contorting myself into various positions – on the table, foot on the wooden frame, I marvel at how Sarah B has reached the age of 70 (ahem!) plus without developing severe arthritis in all of her fingers (I hope I will be just as lucky). Respect to ALL upholsterers!

The inside of your arm should slowly become more sculpted and less wrinkly as you go…and I keep going until I’m content (more or less) that I can smooth nor pull any further.

Then I start on the other arm, and persevere, until like the first arm I feel I can literally go no further. I know that when I come back to knock those tacks into a more permanent state I will be readjusting once more, but until then I decide to move on.